The 2019 Artist of the Year at the All Music Awards (top Togolese music award) released the hot tune on August 30 across on his YouTube channel and other online music stores.

Officially named Adzakey Kodjo Eyonam, Pikaluz is a very versatile artist who is known as the rap god in his country. Pikaluz or Luzy as he is also known by the streets is multilingual and as such, raps in Ewe, French and English and Adja which is an unpopular accent among the Ewes. 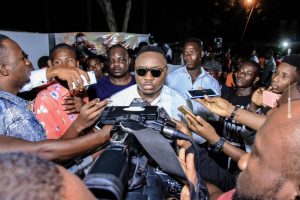 Gbongbonvon which is currently trending in Togo sees Stonebwoy praising God for protecting him against all the plans of his foes. The song which sends a warning to the evil ones also alludes to God as the one who defends us from all their actions.

In his songs, Pikaluz denounces everyday negative realities like duplicity, envy and jealousy and the lack of mechanical solidarity which is disappearing in favour of individualism.

Stop the “nonsense” now!!! Give awards to deserving nominees- Lenny Akpadie to VGMA

Sports Yakubu Ibrahim Cityzen - October 20, 2020
0
The Ghana Football Association is pleased to announce that application for media accreditation for the 2020/21 Football season is officially open. Media organizations interested in...

Stop the “nonsense” now!!! Give awards to deserving nominees- Lenny Akpadie to VGMA